Books I Want To Read This Fall🍁🍂

Technically we’re about 3 weeks into Fall here in Australia 😉 The weather is slowly starting to cool down, perfect for tea+blankets+books! I have a list of books that I think would go well with the weather. I just feel like chunky, magical and semi-angsty books go well with the cozy season.

When four classmates from a small Massachusetts college move to New York to make their way, they’re broke, adrift, and buoyed only by their friendship and ambition. There is kind, handsome Willem, an aspiring actor; JB, a quick-witted, sometimes cruel Brooklyn-born painter seeking entry to the art world; Malcolm, a frustrated architect at a prominent firm; and withdrawn, brilliant, enigmatic Jude, who serves as their center of gravity. Over the decades, their relationships deepen and darken, tinged by addiction, success, and pride. Yet their greatest challenge, each comes to realize, is Jude himself, by midlife a terrifyingly talented litigator yet an increasingly broken man, his mind and body scarred by an unspeakable childhood, and haunted by what he fears is a degree of trauma that he’ll not only be unable to overcome—but that will define his life forever.

I’m actually currently reading this! I’ve been putting it off for a couple of months but I’m ready to dive back into it! It’s so immersive. I can read it all night long, but sadly my eyes can’t take it (and sometimes my heart) xD I love that it’s fast paced but it’s not like you zap through it, you sort of take your time with it and take in the writing and emotions the author is trying to evoke.

Synopsis [MAY CONTAIN SPOILERS FROM BOOK 1 & 2]:

Feyre has returned to the Spring Court, determined to gather information on Tamlin’s maneuverings and the invading king threatening to bring Prythian to its knees. But to do so she must play a deadly game of deceit-and one slip may spell doom not only for Feyre, but for her world as well.

As war bears down upon them all, Feyre must decide who to trust amongst the dazzling and lethal High Lords-and hunt for allies in unexpected places.

In this thrilling third book in the #1 New York Times bestselling series from Sarah J. Maas, the earth will be painted red as mighty armies grapple for power over the one thing that could destroy them all.

oF COurSE I HAD TO INCLUDE THIS BEAUT ❤ I pre-ordered this book last month (my very first pre-order!) and I can’t wait to finally have it in my hands 😮 The windy weather will really hit us by May and I feel like ACOWAR is the ideal book to cuddle with! ❤

One day, Takamiya Naho receives a letter written to herself from ten years in the future. As Naho reads on, the letter recites the exact events of the day, including the transfer of a new student into her class named Naruse Kakeru.

The Naho from ten years later repeatedly states that she has many regrets, and she wants to fix these by making sure the Naho from the past can make the right decisions—especially regarding Kakeru. What’s more shocking is that she discovers that ten years later, Kakeru will no longer be with them. Future Naho asks her to watch over him closely.

Not sure if I can get my hands on this manga by Fall but if I do i’d probably jump straight into it! I watched the Anime and fell in looove ❤ so of course I had to try out the manga. I’ve heard such amazing things ❤ Synopsis [MAY CONTAIN SPOILERS FROM BOOK 1]:

The darker the sky, the brighter the stars.

In a land on the brink of war, Shahrzad is forced from the arms of her beloved husband, the Caliph of Khorasan. She once thought Khalid a monster—a merciless killer of wives, responsible for immeasurable heartache and pain—but as she unraveled his secrets, she found instead an extraordinary man and a love she could not deny. Still, a curse threatens to keep Shazi and Khalid apart forever.

Now she’s reunited with her family, who have found refuge in the desert, where a deadly force is gathering against Khalid—a force set on destroying his empire and commanded by Shazi’s spurned childhood sweetheart. Trapped between loyalties to those she loves, the only thing Shazi can do is act. Using the burgeoning magic within her as a guide, she strikes out on her own to end both this terrible curse and the brewing war once and for all. But to do it, she must evade enemies of her own to stay alive.

The saga that began with The Wrath and the Dawn takes its final turn as Shahrzad risks everything to find her way back to her one true love again.

I’ve been meaning to read this ever since I finished The Wrath and The Dawn! I was so ready to drop everything and read it once it came out, and did I do exactly that? Nope xD Not sure why. I guess I lost the hype for it, bUT a friend of mine (whom I recommended TWATD to) jumped on this sequel and has been pestering me to read it ever since. Ah, the irony xD I’m sooo excited to get back to this duology though! I miss the characters </3

Foolish love appears to be the Roux family birthright, an ominous forecast for its most recent progeny, Ava Lavender. Ava—in all other ways a normal girl—is born with the wings of a bird.

In a quest to understand her peculiar disposition and a growing desire to fit in with her peers, sixteen-year old Ava ventures into the wider world, ill-prepared for what she might discover and naïve to the twisted motives of others. Others like the pious Nathaniel Sorrows, who mistakes Ava for an angel and whose obsession with her grows until the night of the Summer Solstice celebration.

That night, the skies open up, rain and feathers fill the air, and Ava’s quest and her family’s saga build to a devastating crescendo.

First-time author Leslye Walton has constructed a layered and unforgettable mythology of what it means to be born with hearts that are tragically, exquisitely human.

The story sounds super dreamy, the kind of dreamy where you can curl up with cozy blankets and tea ❤ I’ve been putting this book off for about 2 years now and I think it’s time I pick it up 😮 I’ve heard nothing but great things! 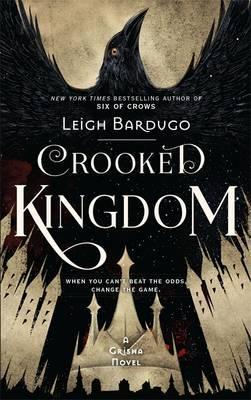 Synopsis [MAY CONTAIN SPOILERS FROM BOOK 1]:

Kaz Brekker and his crew have just pulled off the most daring heist imaginable.
But instead of divvying up a fat reward, they’re fighting for their lives.
Double-crossed and badly weakened, they’re low on resources, allies and hope.
While a war rages on the city’s streets, the team’s fragile loyalties are stretched to breaking point.
Kaz and his crew will have to make sure they’re on the winning side… no matter what the cost

Read and LOVED the first book, had to take a break from it instead of diving straight into the sequel, but I think the colder season will get me into the groove of thievery and snarky characters ❤

What are some books you’ve been meaning to read this season? Let me know down in the comments! I hope you enjoyed reading this post 🙂