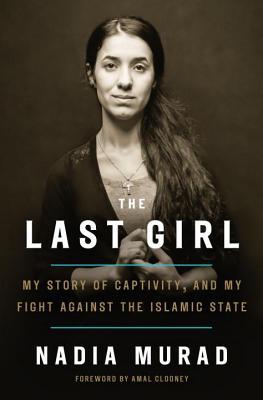 Nadia Murad was born and raised in Kocho, a small village of farmers and shepherds in Iraq. A member of the Yazidi community, she and her eleven brothers and sisters lived a quiet life. Nadia was in high school and had dreams of becoming a history teacher and opening her own beauty salon.

On August 15th, 2014, when Nadia was just twenty-one years old, this life ended. ISIS militants massacred the people of her village, executing men old enough to fight and women too old to become sex slaves. Six of Nadia’s brothers were killed, and her mother soon after, their bodies swept into mass graves. Nadia and her two sisters were taken to Mosul, where they joined thousands of Yazidi girls in the ISIS slave trade.

Nadia would be sold three times, raped, beaten, and forced to convert to Islam in order to marry one of her captors. Finally, she managed a narrow escape through the streets of Mosul, finding shelter in the home of a Sunni Muslim family whose eldest son risked his life to smuggle her to the safety of a refugee camp. There, surrounded by bereaved and broken Yazidi families, Nadia decided to devote her life to bringing ISIS to justice.

As a farm girl in rural Iraq, Nadia could not have imagined she would one day address the United Nations or be nominated for the Nobel Peace Prize. She had never been to Baghdad, or even seen an airplane. As a slave, she was told by her captors that Yazidis would be erased from the face of the earth, and there were times when she believed them.

Today, Nadia’s story–as a witness to ISIS, a survivor of rape, a refugee, a Yazidi–has forced the world to pay attention to the ongoing genocide in Iraq. It is a call to action, a testament to the human will to survive, and a love letter to a lost country, a fragile community, and a family torn apart by war.

I’m still a little shaken. That was such a powerful read. So intimate and raw and real. I could feel the terror and sadness endured by the victim, feeling both scared and heartbroken for what has happened to Nadia and her family. I have learned so much from her story and I admire her for projecting a voice that aims to educate and help people.

This is actually my very first autobiography/memoir and it feels like I was reading a fiction novel. I couldn’t fathom a young girl going through something so horrifying and inhumane. Each page was just as terrifying as the next, and I wanted to stop reading but at the same time I couldn’t. I was hooked. I was frustrated and scared. By the end of the book, I had to collect myself, go through the events that occurred in the novel and process them again slowly.

Again, I still couldn’t wrap my head around Nadia’s story. I felt so shallow and ignorant after reading it. Her unfiltered story made me weep for the victims of ISIS, and ultimately the country torn apart by war and genocide.

This book is not for the lighthearted, but I do encourage everyone to read it, especially to people like me who are only aware of the surface issues but not anything beyond that. ‘The Last Girl’ may only explore one side of the story behind the terrors of ISIS, but it is worth the time taken to empathise with those who fell victim (directly or indirectly) to the genocide. I am still in awe with the way the author’s past shape the person she is today. Nadia and her story will continue to educate readers and inspire people to help those in need. There is still a lot that i am unaware of with regards to this ongoing issue, but reading Nadia’s story really opened my eyes to what is really happening in the real world.

Thank you so much to Crown Publishing for sending me a free ARC in exchange for an honest review! ❤

if you’re interested in buying The Last Girl, you can click here to shop the book at Book Depository – i receive a small commission if you use the link! 🙂