Book Review: The Shadow of The Wind by Carlos Ruiz Zafón 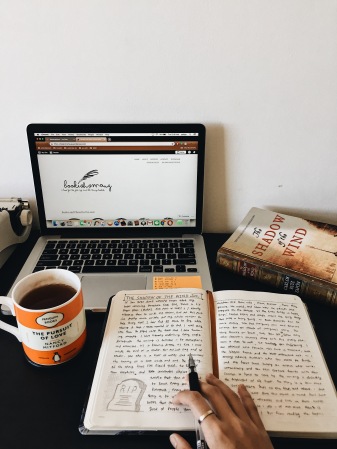 Title: The Shadow of The Wind

Barcelona, 1945 – just after the war, a great world city lies in shadow, nursing its wounds, and a boy named Daniel awakes on his eleventh birthday to find that he can no longer remember his mother’s face. To console his only child, Daniel’s widowed father, an antiquarian book dealer, initiates him into the secret of the Cemetery of Forgotten Books, a library tended by Barcelona’s guild of rare-book dealers as a repository for books forgotten by the world, waiting for someone who will care about them again. Daniel’s father coaxes him to choose a volume from the spiraling labyrinth of shelves, one that, it is said, will have a special meaning for him. And Daniel so loves the novel he selects, The Shadow of the Wind by one Julian Carax, that he sets out to find the rest of Carax’s work. To his shock, he discovers that someone has been systematically destroying every copy of every book this author has written. In fact, he may have the last one in existence. Before Daniel knows it his seemingly innocent quest has opened a door into one of Barcelona’s darkest secrets, an epic story of murder, magic, madness and doomed love. And before long he realizes that if he doesn’t find out the truth about Julian Carax, he and those closest to him will suffer horribly.

As with all astounding novels, The Shadow of the Wind sends the mind groping for comparisons—The Crimson Petal and the White? The novels of Arturo Pérez-Reverte? Of Victor Hugo? Love in the Time of Cholera?—but in the end, as with all astounding novels, no comparison can suffice. As one leading Spanish reviewer wrote, “The originality of Ruiz Zafón’s voice is bombproof and displays a diabolical talent. The Shadow of the Wind announces a phenomenon in Spanish literature.” An uncannily absorbing historical mystery, a heart-piercing romance, and a moving homage to the mystical power of books, The Shadow of the Wind is a triumph of the storyteller’s art.

if you don’t already know what my book reviewing procedure looks like, here’s a little sneak peak:

five post-it notes. five! 😮 i usually reference them to write my reviews, but at this point i’ve pretty much written out my whole review on these sticky notes. i just had so much to say while reading it. gosh i never wanted it to end. i was only less than 20 pages into the book and i was swooning already. the writing is absolutely brilliant! so atmospheric and beautiful. it’s a literary dream. it’s like i was inside the mind of a reader, but not just any kind of reader – one who is a lover of words and appreciates the beauty of a book inside and out. the fluidity of the story flows like liquid gold – so full of raw emotions and invaluable choices of words that you just want to savor every word, every paragraph, every page!

the story is so wholesome too. i love books that emphasize on the good of people, young children and their wits, their passion, how they perceive the world, pure friendship. it’s the little things in books, guys! sword fights and magic aren’t the only things that can keep a story going! each character has so much essence. you feel everyone’s pain and emotions because you get enough of everyone’s story. the book focuses on daniel, but you get to follow every other character’s journey along with his. every plot turn is done so well – so subtle and unforgiving. i am obsessed with fermín! he is such a treasure. he has the biggest heart and the most attractive wit.

i always admire authors who can make me laugh and my heart swell. surely an author who writes romantically and can still capture hearts with their humor is hard to come by. the writing is definitely the highlight of this book. the story is a gem that i selfishly hope no one finds out about :’) (i’m only half kidding. everyone needs to read this book!!!). i hope anyone who gives this novel a read feels just as much, and resonates and lives in these worlds just as fully as i do – if not more.

here is something that i got from reading the book: the shadow of the wind is a book about people. this book shows that people need people. that people change. there are good people out there, misunderstood ones, those that are scarred for life. there are people who got lucky, found love, people who just wants to be themselves, and people who just wants to survive. people are just… that. humans. humans with different goals and beliefs and ambitions – all formed and morphed through the childhood they had and the people they surround themselves with. people also make choices and mistakes in the process, all of which falls on the beholder (but should always be acknowledged from two opposing sides at all times). this might sound a little dramatic, but i felt like a changed person after finishing the novel. on my instagram, i wrote out a caption for a dedicated the shadow of the wind post after finishing the book (which should summarise and conclude this review). i wrote: “i feel terribly disoriented after reading the last hundred pages. kind of like waking up from a long nap you didn’t intend to take. perhaps the best books leave you a little disgruntled – wanting more – one way or another. i was lost in a trance. when i closed the book, i was still trying hard to gather my emotions and thoughts together. it felt like the story was executed in a fair pace. not leaving any details behind, no rushing. but the memory or reading the words from those pages dissipated the moment i closed the book. everything became a blur to me. it was painful to read the book. it was scary and sad. so painful and real. all your emotions scrunched up into this undecipherable ball. i am at loss of words (ironically, after reading the ingenious work of a talented author). i am just so in awe of the novel. it was everything.”

if you’re interested in buying The Shadow of The Wind, you can click here to shop the book at Book Depository – i receive a small commission if you use the link! 🙂