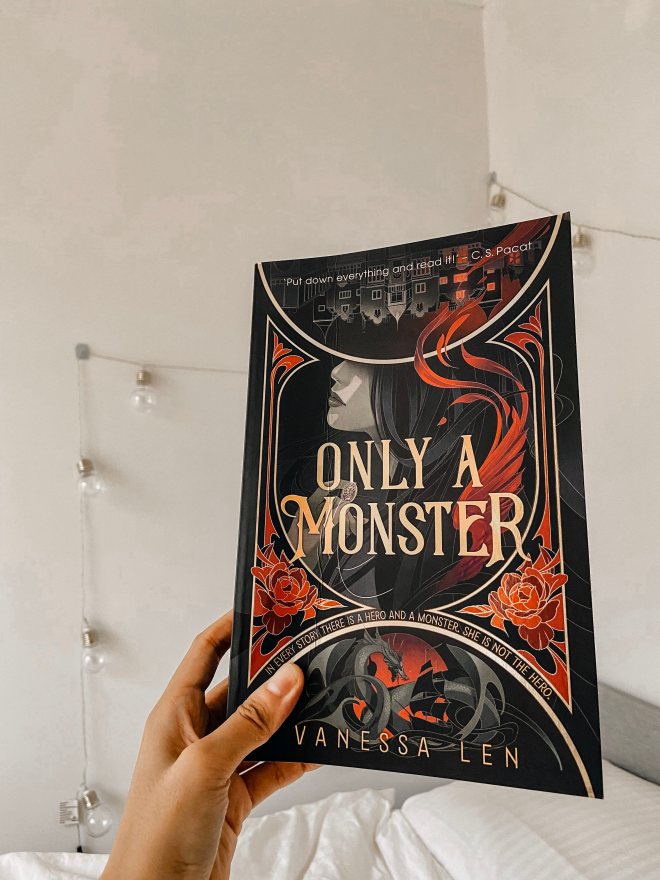 Book Review: Only a Monster by Vanessa Len

Title: Only A Monster

It should have been the perfect summer. Sent to stay with her late mother’s eccentric family in London, sixteen-year-old Joan is determined to enjoy herself. She loves her nerdy job at the historic Holland House, and when her super cute co-worker Nick asks her on a date, it feels like everything is falling into place.

But she soon learns the truth. Her family aren’t just eccentric: they’re monsters, with terrifying, hidden powers. And Nick isn’t just a cute boy: he’s a legendary monster slayer, who will do anything to bring them down.

As she battles Nick, Joan is forced to work with the beautiful and ruthless Aaron Oliver, heir to a monster family that hates her own. She’ll have to embrace her own monstrousness if she is to save herself, and her family. Because in this story . . .

Wow, this was really good. I don’t remember the last time I properly enjoyed a YA novel from the beginning till the end this much. Granted this was quite slow at first, it picked up gradually when the conflict started. This book also has one of the most unique plots ever. The way the monsters’ powers worked and the quirks of all the monster families were so interesting to read about! I also found the world-building to be very well done. For a first installment, you’re given just enough to understand the magic system and follow through without asking too many questions, while at the same time wanting to learn more of the characters, the history, and the magic.

We will start with the pacing – very fast paced and thrilling! I literally flew through 100 pages in a night without even realising and finished the whole thing in a little under a week, which is pretty fast for someone who juggles between books and don’t actually end up finishing any of them. So much happened so quickly. The characters are constantly on the move, along with the plot. The characters are great – lots of backstory that can still be expanded to make them more fleshed out. But I wish the character dialogues flowed more seamlessly. The friendship and romance did not hit me very hard because of the stale communication between the characters. It had SO much potential. There was an even bigger potential for an angsty enemies to lovers romance, which I was really hoping for from reading the synopsis… but it didn’t really happen. There was maybe a twinge of it, but it wasn’t enough! I also wish we got to learn more about Joan’s parents as I was really looking forward to the Asian rep (from her dad’s side). We only got to see her communicate with her dad once in the whole book, and it was a really sad moment too… so I would have liked this aspect of the book to be improved. Hopefully in the next book then!

With all that said, there were quite a few things that made me consider docking another star off.. but the fact that the book kept me up at night and was a thrill to whiz through, I just couldn’t. No YA Fantasy book has gripped me that hard in a long time, and for that, this book deserves its 4 stars. It’s not perfect by any means, but it was highly enjoyable. Plus it has a ton of potential that will hopefully be maximised in the next two books! ❤

Thank you very much to Allen & Unwin for sending over a copy in exchange for an honest review 🙂 You can purchase a copy of the book using the link below – I receive a small commission from it!

Purchase ‘Only A Monster’ by Vanessa Len!